Originally published on January 27, 2014 for the National Yacht Club by Oliver Bertin 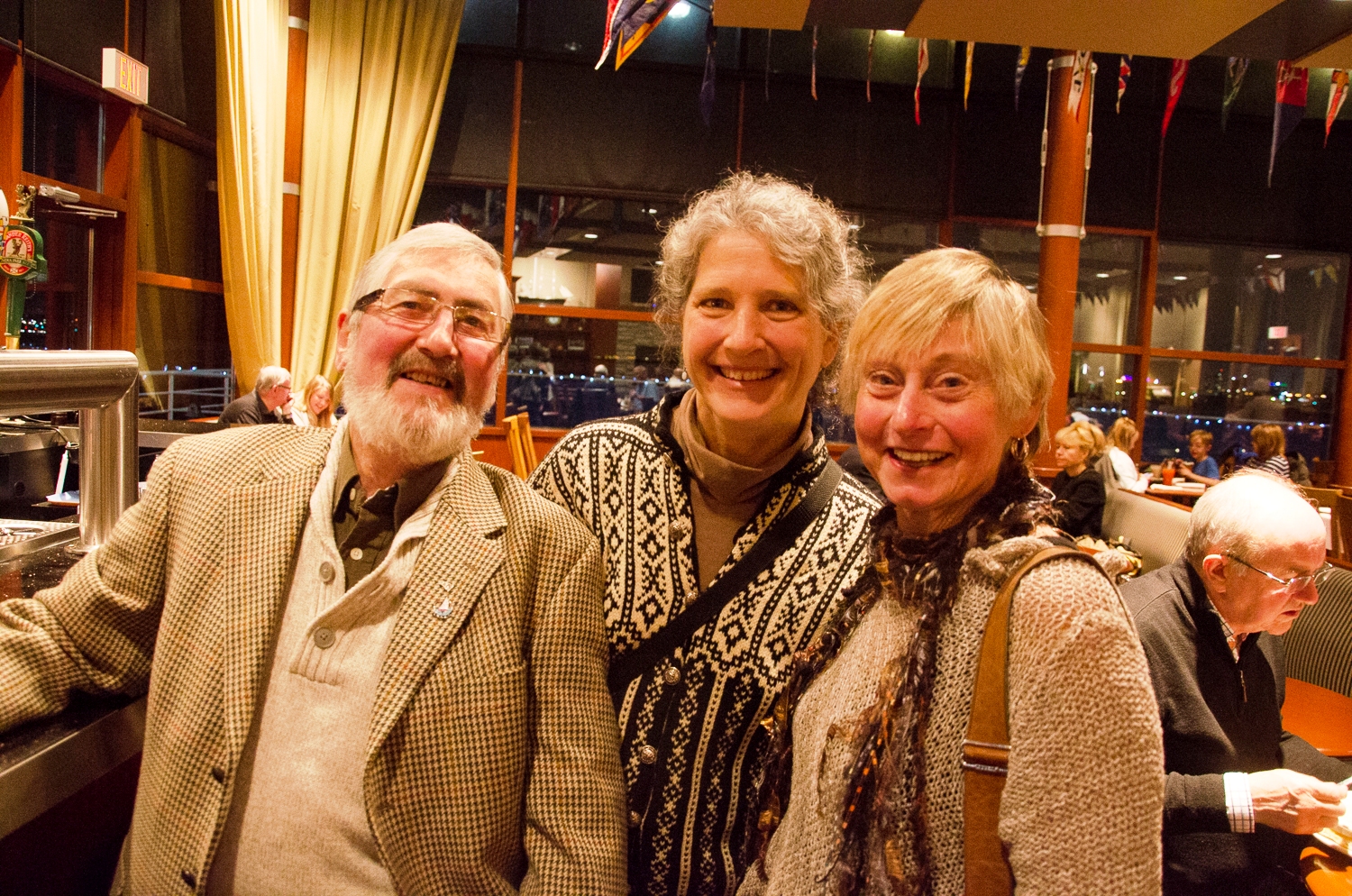 The centre of attention was Tania Aebi, the woman who went around the world in a Contessa 26 solo at the age of 18.  Everybody has heard of her.  She was joined by Declan Mackell, who circumnavigated in a Contessa 32 and Gary Bannister, the guy who built our Contessas.

A famous group for sure.

They were the guests of the Lake Ontario Contessa Association, a loosely knit group of 19 Contessa owners in the Toronto area.  Three of these lovely boats reside at the NYC: John Flanders’ Free ‘n’ Easy, Paul Beaven’s HMS Affinity and Oliver Bertin’s Whimsy.  Former NYC member Jordan Harkness also has a Contessa but he has moved to the Etobicoke Yacht Club which is closer to his home.  There are another three Contessas at Alexandra Yacht Club next door and several at Toronto Sailing and Canoe Club, EYC and Mimico Cruising Club.

For the few who aren’t familiar with Tania Aebi, she was the stereotypical New York bicycle courier/obnoxious teenager.  Her exasperated father finally told her to make something of her life, so she did.  She chose to sail around the world, solo, in a 26-foot Contessa.

Her boat was Varuna, Contessa number 324, built right here in Toronto just yards from our front gate.  If you’d like to see what it looked like, check out Free ‘n’ Easy, John Flanders’ Contessa no. 315. They were built a month or so apart.

Some people were surprised that she chose such a small boat.  But she said she liked that size because it could handle the worst weather, was more than big enough for one person and easy for an 18-year-old girl to handle.  “It never over-powered me,” she said.

That trip changed her life. She discovered a fascinating planet, discovered herself and had a thoroughly wonderful time doing it. The result was a charming book about her voyage titled Maiden Voyage, with a follow-up called I’ve Been Around, a collection of stories she wrote for sailing magazines. Maiden Voyage is a must-read for every sailor, for every teenager and for every parent of a teenager.

Tania now lives in a small village in rural Vermont, has two sons in marine engineering school and spends her time organizing 10-day cruises of the Caribbean. I gather from some of the guests that she is a capable and entertaining tour leader.

By the way, I finally discovered how to pronounce her name.  It is “Abbey“. 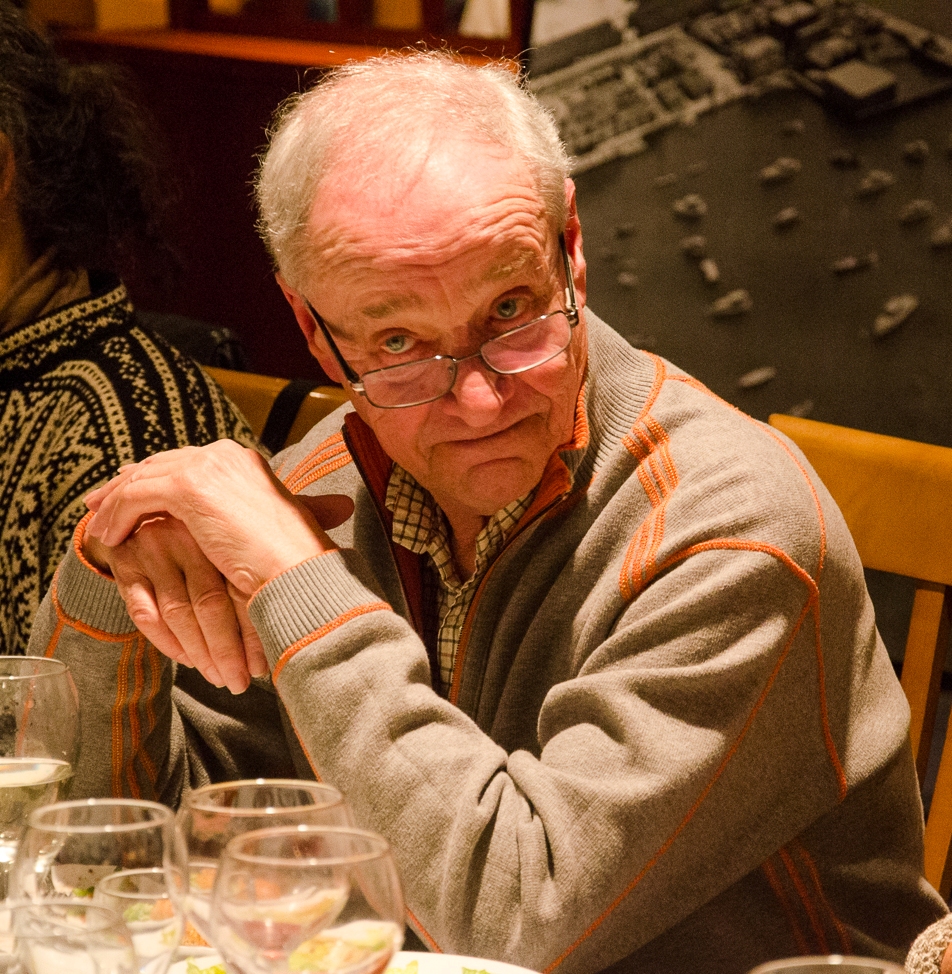 When Jordan heard that Tania was speaking at the Toronto International Boat Show last month, he decided to track her down and invite her for a friendly dinner with a handful of fellow Contessa owners. To our great surprise she actually accepted!

But that’s when the event went a little out of control. The call went out to the members of LOCA, the Contessa association, and more than 30 asked to come. So much for our cozy little gathering.

Then Tania asked to bring seven of her friends. Sure why not? Four of them were local people who have gone sailing with her in the Caribbean, all very pleasant people. Then there was Declan Mackell, a famous guy to those in the know but a bit of a mystery man.

There’s a photograph of Declan in Genco’s downtown store, a handsome bearded guy in a toque and sailor’s sweater.  He had just returned from an around the world voyage on his Contessa 32, a trip he started in 1979 back when few people dared such a trip. He later worked as a salesman for JJ Taylor, sold Tania her boat back in 1985 and helped set it up, right here in our basin. They became fast friends but lost touch with each other after Tania left on her two-year voyage.

We’ve tried for years to track him down to speak at the Contessa association without much success. There were reports that he had given up sailing, that he lived on a boat in a mysterious bay somewhere, that he had moved to British Columbia where he was out of touch of telephones and internet and probably semaphore too.

But it turned out that he is alive and well and living in civilization. By sheer coincidence he had written to Tania a few weeks ago just to say hello.  It turns out that he is still living in Toronto, is a member of the Mimico Cruising Club and was definitely available for dinner with Tania.
The third guest was Gary Bannister, a key part of our Contessa triumvirate.  NYC members of a certain age will remember the old clubhouse at the east end of the basin.  Next door was a collection of brick buildings, a long dock and lots of neat old boats.  That was J. J. Taylor & Sons Ltd., a venerable boat-builder from 1904 and the birthplace of our Contessa 26s and Contessa 32s, along with hundreds of lovely old wooden launches and the Fairmile series of wartime patrol boats.

The late Al Scott, a former NYC member, ran that company through the 1960s and 70s before it was taken over by Gary Bannister.  Together, they built nearly 400 Contessa 26s before the shop closed in 1990 and moved to an industrial lot in Rexdale.  Their last job was to make the fibreglass gargoyles, designed by famous artist Michael Snow, that grace the north side of the Skydome.
To cut a long story short, the Contessa association now had three famous guests and a long list of Contessa owners who were keen to come for dinner with Tania – a total of 33 people, but nowhere to host them.

A quick visit to Tal Wolf and Marc Williams secured a spot at the NYC on the last Friday of the boat show.  Whew!  Then Marc and Todd rushed around and set a table that stretched from the window almost to the fireplace, carefully laid out with wine glasses, a full set of cutlery and white tablecloths. It looked very, very impressive.

A great time was had by all – except perhaps Marc, Todd and Eric – who put on a great evening and hopefully got home before midnight!

Thank you Oliver for a great article.Thank you Jose for the photographs. Thank you Adrian for creating and maintaining this valuable web site.
John